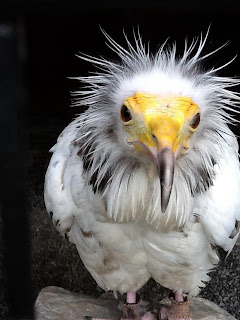 We're back in Nepal and man does it feel good. Summer in Spain was interesting, a success in many ways but didn't quite make the grade in many others, still, nothing ventured, nothing gained. We had some great flights with Heckle, I think we showed a different side to the Harris Hawk, pushed them in a different direction to the one that they are often in. I certainly haven't seen Harris Hawks taken up to the heights that we were flying them at. Their versatility still astounds me, but remember, getting them flying like this is not a walk in the park and certainly not a part time activity. Heckle is now being rested at her winter camp, the fabulous Cim D'Aligues bird of prey center near Barcelona and Jeckle has been passed onto a new owner where he'll be used for hunting and educational work.

The best bit about this summer was that we got to spend some quality time with Talo, I feel blessed that we were in a situation that I was able to be around him the whole time, not missing a moment of his early development. He's now a toddler with a cheeky two teeth grin, how time flies. He'll be a walkie talkie soon and I'll be running around after him which won't be so bad, the exercise will do me good as I'm still carrying a bit of extra summer weight :) I blame the Tapas and paella.

Nepal is, well as we say here, same same but different. The birds look fantastic after their moult, we now have two shinny white Egyptian Vultures, albeit still a little on the fat side. But slowly slowly their weights are coming down and their fitness levels going up. Bob was flown free for the first time today so he'll be the first to fly with the gliders in about a weeks time. Kevin, like me is still carrying some excess fat, but he's happy to be in training and looking better every day.

The Paragliding industry here is going through some major changes, there are about 14 paragliding companies operating now. New rules and regulations are being made daily, pilot numbers per company are being restricted to prevent over crowding, which in some ways is a good thing but more companies keep coming so it kind of defeats the object. As for Parahawking, well we have to find a way to comply with the new rules and regs and fit in where we can, new challenges are ahead. We have the busiest season coming up, more bookings than ever before which means that we can donate more money to Vulture Conservation projects. Our goal this year is to raise 5000€ from Parahawking flights and other means, wish us luck. We'll be reporting on the progress of the vulture safe zone project that Parahawking has been supporting the last couple of years to see where and how the money has been spent.

Gin Gliders, Sponsor of Parahawking since 2004