Back to basics but still moving forward 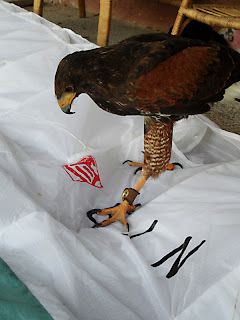 Whilst things are still moving in the right direction, we've had a minor setback with Jeckle. After a slight brush with the Paraglider lines during training the other day, he's now become quite fearful of the gliders. He'll fly after us, follow us but turn away at the very last minute when we call him to come and land. At first we thought it might be because of the tandem and it's size but he also reacts in the same way when I fly him solo which was surprising.

All is not lost, it just means that we have to go back to basics and help him regain his confidence around the gliders. It's worth noting though that we don't force them to do anything they don't want to do, all we can do is encourage certain behaviour. If he feels that it's simply not worth the risk then he's unlikely to overcome his fear and we'll accept that. This is no different than their behaviour as a trained hunting bird or even in the wild for that matter. For example, a bird that has had a wresting match with a hare and come off worse, is likely to never want to attempt to catch a hare again. These are the challenges when training birds of prey, if this was easy, there would be more people doing it.

Heckle on the other hand is improving steadily, she flies well with the gliders, too well in fact. She loves it so much it's become difficult to get her back down to the ground when there are still gliders in the air. For now we've isolated some areas of her training that need some fine tuning but it's fun and rewarding watching her develop and progress nonetheless.

Summer started late here in Alicante, the changeable weather has not made it easy. Up until now we've been unable to get a good run of conditions where it's been suitable to train and fly the birds daily, which I believe is the key to our success in Nepal. That's all about to change though, I sensed it in the air yesterday evening after a couple of beautiful tandem flights at the coastal site of Cabo de Santa Pola.

This place is really starting to grow on me, we've been welcomed with open arms by everybody we've met. Nick, Kath and their son Paco who run Doyouwanna Paragliding Service have become our Spanish family and have extended every possible welcome to which we can't thank them enough. The local pilots on the hill are warm and friendly and are full of praise and best wishes for our success, a refreshing attitude! I hope we don't let them down.

For now, we may go to the beach and introduce Talo to the Mediterranean. We'll return for a siesta then wait for the refreshing sea breeze to kick in before heading off to the hills. Life is good!
Posted by Scott Mason at 3:35 AM

Gin Gliders, Sponsor of Parahawking since 2004